Hibiki is a tan-skinned teenage girl of average height with long blonde hair styled in two high ponytails. When going to the Silverman Gym, her outfit consists of a black tank top and red short shorts. Hibiki is thicker in build compared to the other girls, and has some noticeable pudginess due to a combination of overeating and her sedentary lifestyle, which causes her to become insecure and seek exercise.

In the beginning of the series, she was depicted to have 35% body fat.

Hibiki is a big eater who enjoys eating junk food. When Akemi asked her about her eating habits, she said that she eats a meal at least six times a day. However, when she realizes that she gained weight and she believes she will no longer attract anyone, she decides to go to Silverman Gym to lose weight.

She seems to have a great dislike for overly muscular bodies, and when she saw several men with buff bodies in the Gym, she immediately wanted to leave. However, she remained in the Gym when Machio Naruzo arrived. Although she initially develops a crush on him because of his good looks, she is shocked when she finds out that Machio also has a very muscular body.

Hibiki is a second year high-school student at Koyo Women's Academy. She greatly enjoys eating, until one day Ayaka tells her that she gained weight. She decides to go to the Silverman Gym in order to lose weight. There, she meets Soryuin Akemi, who wants to join the gym in order to live a healthier life.

When Hibiki and Akemi enter the gym, the former is shocked to see that it is full of muscular men and immediately wants to leave. However, she stops when Machio Naruzo appears. Due to his good looks, Hibiki changes her mind and remains in the gym.

Although she does not have much stamina, Hibiki has shown to have great physical strength as shown when she accidentally destroys a punching bag with a single punch. On a similar occasion, she sent two Machio's flying with said punching bag.

She is able to defeat Ayaka (a semi-professional boxer) and Zina in arm-wrestling almost instantly.

She once lifted a boulder, which is said to give luck in love to those who lift it. She also totaled a punching machine.

She once cut a scarecrow in half with a single shuriken.

The source of this strength seems to be an adrenaline fueled fighting sense that comes out when she is properly motivated.

She has not perfected this though, she cannot call upon this strength at will and on one occasion, she hit herself in the nose with a baseball while trying to hit it with a baseball bat.

Hibiki is by her own account, a skilled gambler. She states that she hasn't lost at slots and is great at mahjong.

Machio Naruzo: He is a trainer at the Silverman Gym who regularly coaches Hibiki and Akemi. Hibiki appears to develop a crush towards him due to his good looks, which convinced her to join the gym.

Soryuin Akemi: Hibiki became friends with Akemi in the second year of high school because of the gym. Akemi's riches and muscle fetish freak her out a bit, she still likes her.

Uehara Ayaka: They have been best friends since day one in high school. They both share common interest in series and movies which are often action. Despite being best buds, both didn't know about each others personal lives before the start of the series (Hibiki didn't know Ayaka was from a family of boxers and Ayaka was unaware Hibiki's brother's rich).

Zina Void: After defeating Zina in an arm wrestling match, Zina moved in with her and enrolled in her school just to get a rematch one day. Hibiki doesn't care much about competing with Zina.

Sakura Ibuki: Her older brother. Hibiki is not bothered by his eccentricities and greatly cares for him. She appears to be ignorant of how wealthy he is (he owns a large apartment building.). 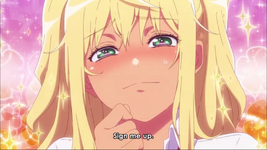 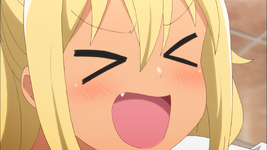 Retrieved from "https://dumbbell-nan-kilo-moteru.fandom.com/wiki/Sakura_Hibiki?oldid=2240"
Community content is available under CC-BY-SA unless otherwise noted.